The game may run at double speed in Internet Explorer, if you notice it running too fast please try a different browser. In the mean time I will prepare a fixed version.

Hello and welcome to Sky Fallers 1982!

This is a rare and obscure game for the long forgotten  Octagon 5000, a console released in Hong Kong in 1982. Not much is known about the console, only that 6 games were made for it and I'm one of only 4 known owners(one of them being no longer with us), so through the power of technology I bring to you one of its 6 games.

In it your mission is to defend yourself from spooky ghouls from Mars. All you have is your gun, grenades and the inability to shoot anywhere but up.

Shoot the enemies as they fall from the sky but if you're not quick enough you'll have to deal with them on the ground. Drop bombs and jump on grounded enemies to defeat them.

Then once you have gained enough money from your killings, look out for the shop where you can buy new weapons, upgrades and bombs.*

*Please note, you cannot cycle guns in the shop, only on the battlefield).

Left and Right to move.

X = Shoots from your gun.

Up = Cycle through guns you have purchased.

Down + C = Cycle through bombs you have purchased.

Remember you can view all the controls on the pause screen.

He's little. Falls slow, has little HP but these dudes are fast, so watch out.

They're bigger, meaner and fall faster than those Little Ghouls, so be careful.

Those Mars Ghouls had to get here somehow. It flies away fast and drops Ghouls so get ready.

Rumour has it of a 4th super secret enemy that may or may not exist. So pay attention.

- Your default and trusty Gun. It's basic but reliable.

- Machine Gun. It may not be powerful but it sure is fast!

- Spread Shot. They may rain from the sky but you can rain back at them with this!

- Shotgun. a Gun that fires shots.

- The Penetrator. It's like your default Gun but better. Doesn't stop for no Ghoul!

- Grenade. Your basic Bomb. It explodes after a short amount of time.

- Quickboom. Explodes upon impact with the floor, Ghouls, anything!

- Turret. Fires several projectiles into the sky before saying 'adios' and exploding!

- Proxy. Doesn't like being touched.  Explodes when Ghouls are near!

- Bomb XL. An upgrade that increases the radius of ALL EXPLOSIONS. That means the ones caused by enemies dying to!

- Bomb+1. An upgrade that allows you to drop one extra grenade. Isn't that radical!?!?

- Jump Shoes. An upgrade that allows you to jump higher!

- HP+. An upgrade that gives you one extra heart and refills your HP!!!

- Explosion+. Increases the damage of all Explosions!!!!!1 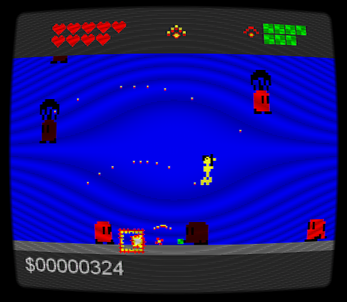 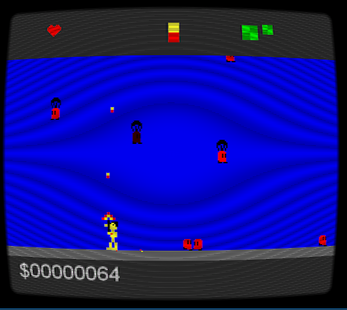 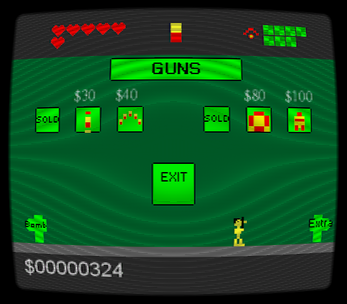